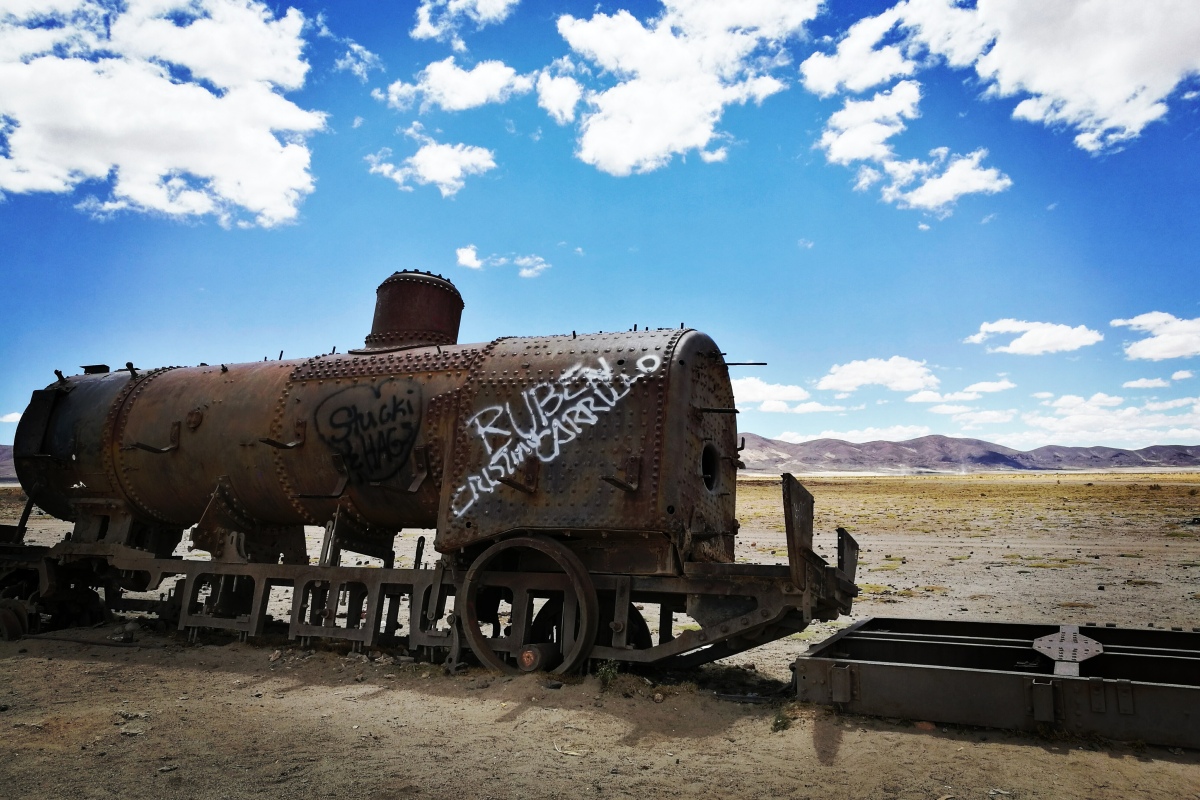 The undisputed highlight of my time in Bolivia was the three day tour through the salt flats of Uyuni and the desert landscape of Eduardo Avaroa National Reserve of Andean Fauna. Still on the road with my buddy Hejko we took an early flight out of La Paz to Uyuni where we met up with Mr. Harrison who you might remember from the post the Salkantay Trek and Machu Picchu. At the time our Bolivian tour guide picked us up with his jeep we met our companions for the next three days; a Brazilian called Henrique aka Frank and two Polish girls. We hived our luggage on top of the vehicle and cramed ourselves inside. Seven people in the car for three days, in the desert. I couldn’t wait.

Our first stop was just a few kilometers outside the city borders: the Train Cemetery, a picturesque place with antique trains and rails which used to transport minerals to the ocean. They were abandoned in 1940, after just 50 years in use.

After strolling around for some time, frenetically trying to get a picture without a ton of tourists in it, we quickly stopped at a handycraft market before making our way into the world’s largest salt flats. And flat it was indeed. Our Subaru SUV cruised across the salt and soon that became the only thing around us. After some time we reached the place where we would have lunch. The building was made out of salt bricks and so were the seats and tables inside it.

Lunch was basic, but at least well salted. It might be that my piece of meat fell on the floor before it landed on my plate, I will never know for sure.
That was the last building we would see for the rest of the day. We drove around 30 or 40 minutes into the flats before stopping for photos and “sightseeing”. Never before was it such a great experience not to see anything or anybody. That is, besides King Kong of course. I kicked his ass, but I guess that is a matter of perspective. 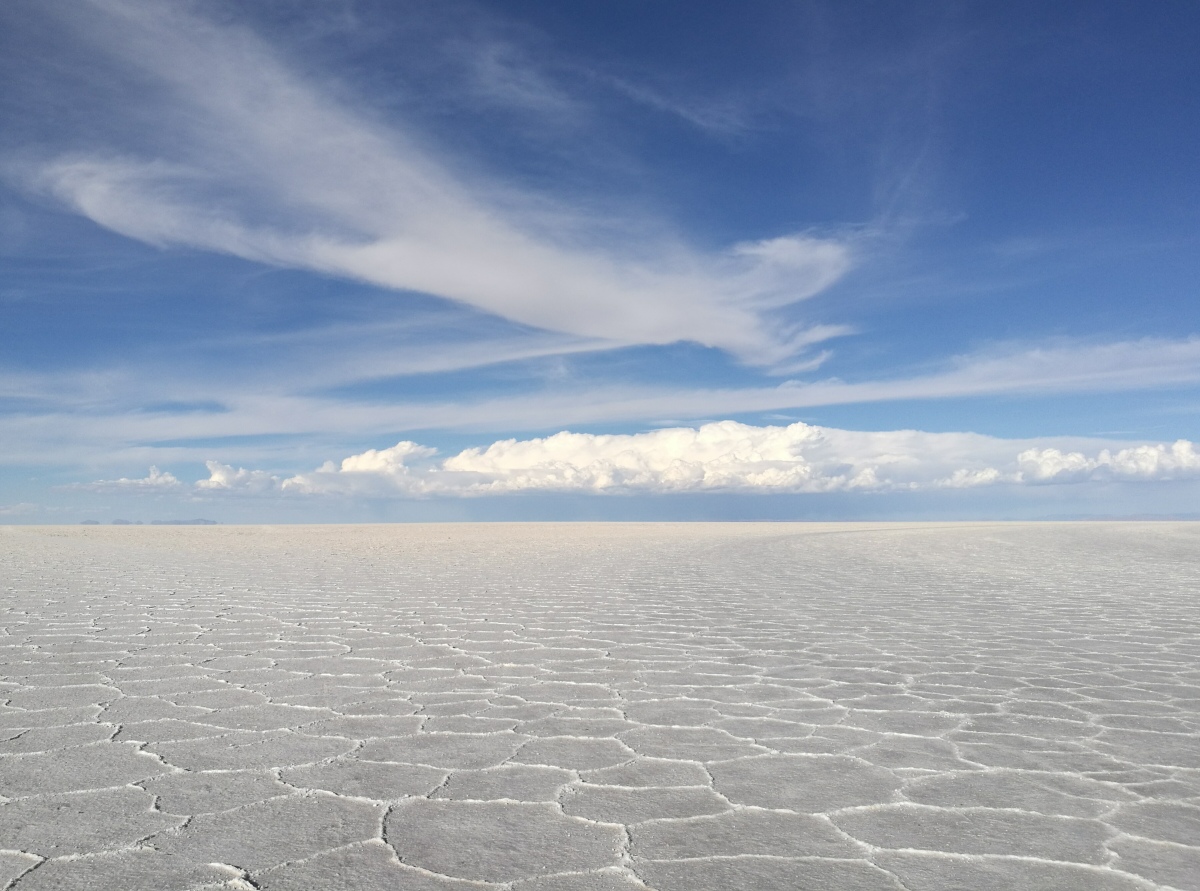 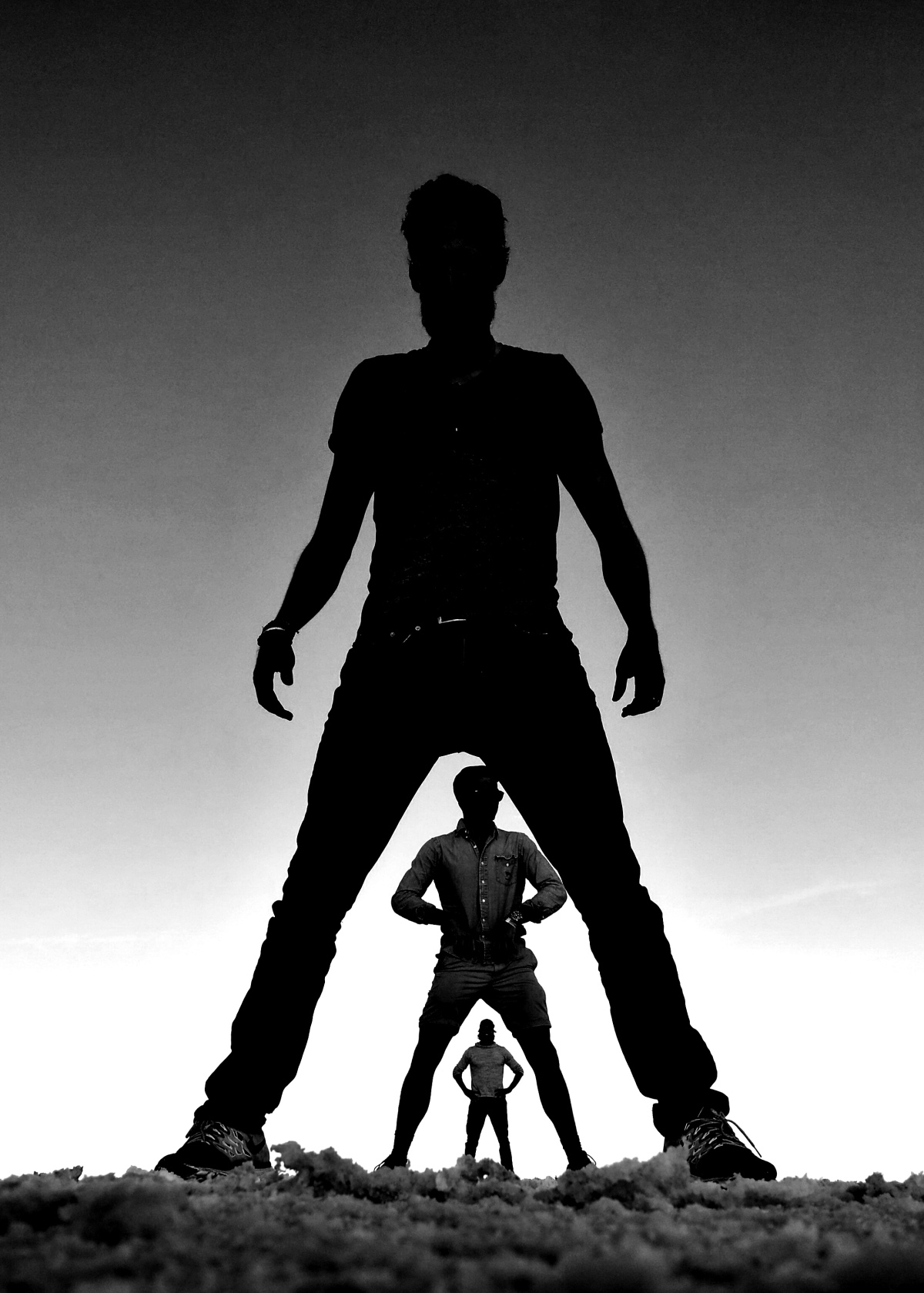 Later, after I don’t know how many kilometers of just driving through this incredibly empty but nevertheless beautiful landscape, our captain took course towards an island in the midst of this white sea of salt. A few cactus-ridden hills appearing from nowhere. We were informed that these cacti grow about one centimeter per year, which makes some of them several hundreds of years old.

With the day coming to an end, we stopped one last time to view the sunset. Close by was a tiny production site of salt bricks which came in quite handy for a few nice pictures.

We spent the night in a simple hotel somewhere at the south border of the salt flats, together with several other groups. The interior was once again made out of salt, including the bed.

Next day we headed into the desert. Our way led us along various volcanoes and small lakes of different colours, some of them populated by hundreds of Flamingos.

In the late afternoon we reached our place for the night. A few very basic brick houses, a shop and a bar somewhere in the middle of the desert. We gathered in the bar and played some serious table tennis before dinner.
In the desert, the nights are cold and clear. No lights around. A great opportunity to look at the stars.

The last day began early, we had to get to the Chilean border close to San Pedro de Atacama; the two Polish girls left the tour here and got a bus to Chile. On the way there, we stopped to walk around steam geysers and to take a bath in a natural hotspring. 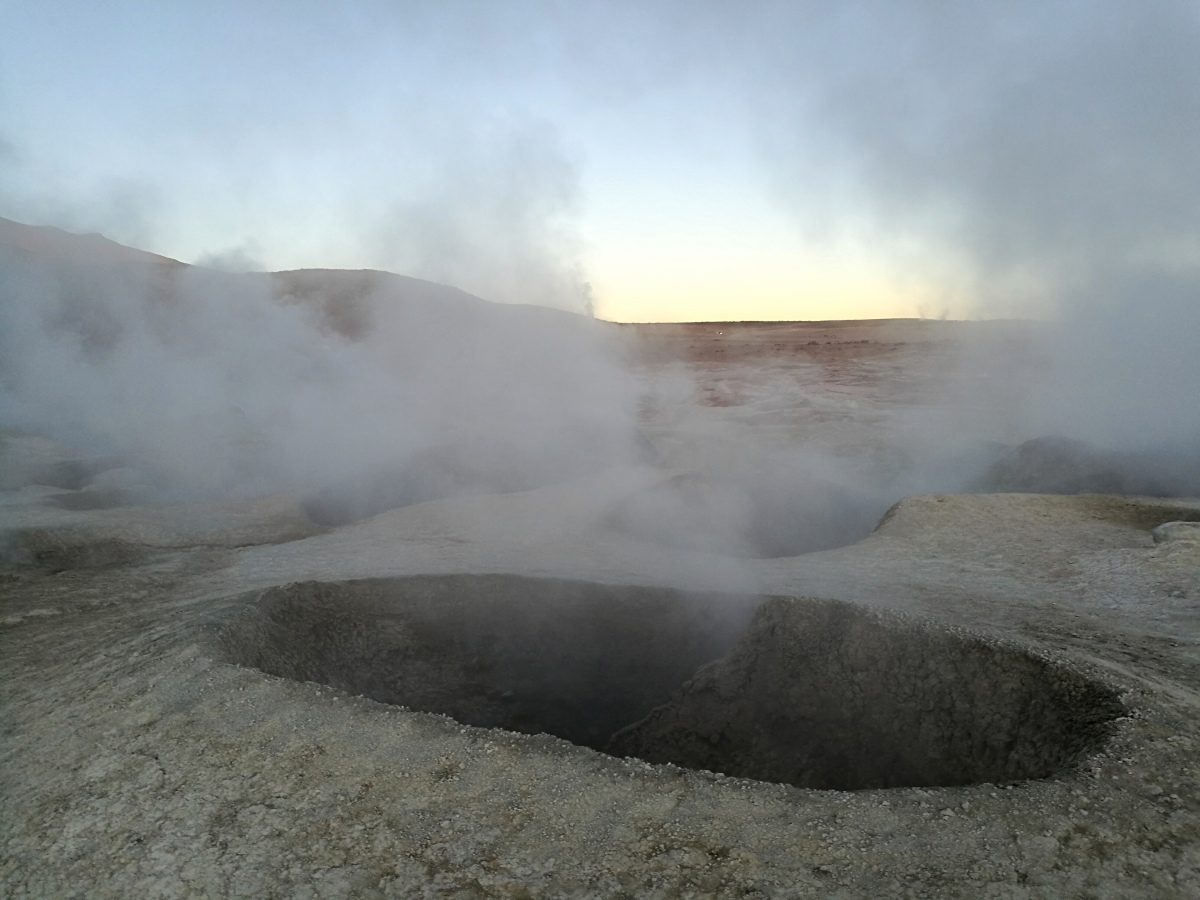 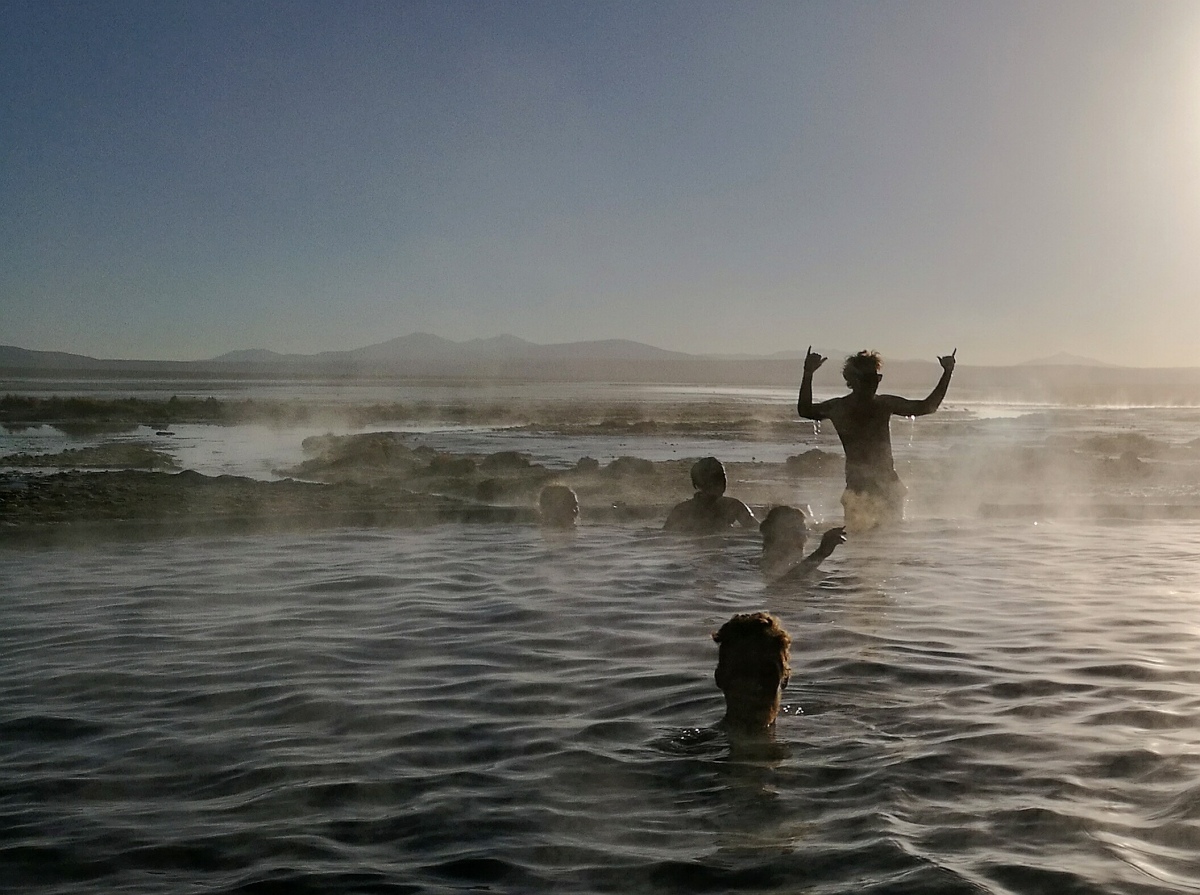 The rest of the tour was basically just an endless way back to Uyuni with a few rather unimpressive stops in between.
Back in town Hejko, Harrison and me went for dinner with the first wifi in three days. We didn’t talk much, it was great. From there we caught our nightbus back to La Paz.

From there I travelled to Sucre where I spent a few days and on to Santa Cruz, from where I took my flight out to Rio de Janeiro for Christmas with Barbara and her family.