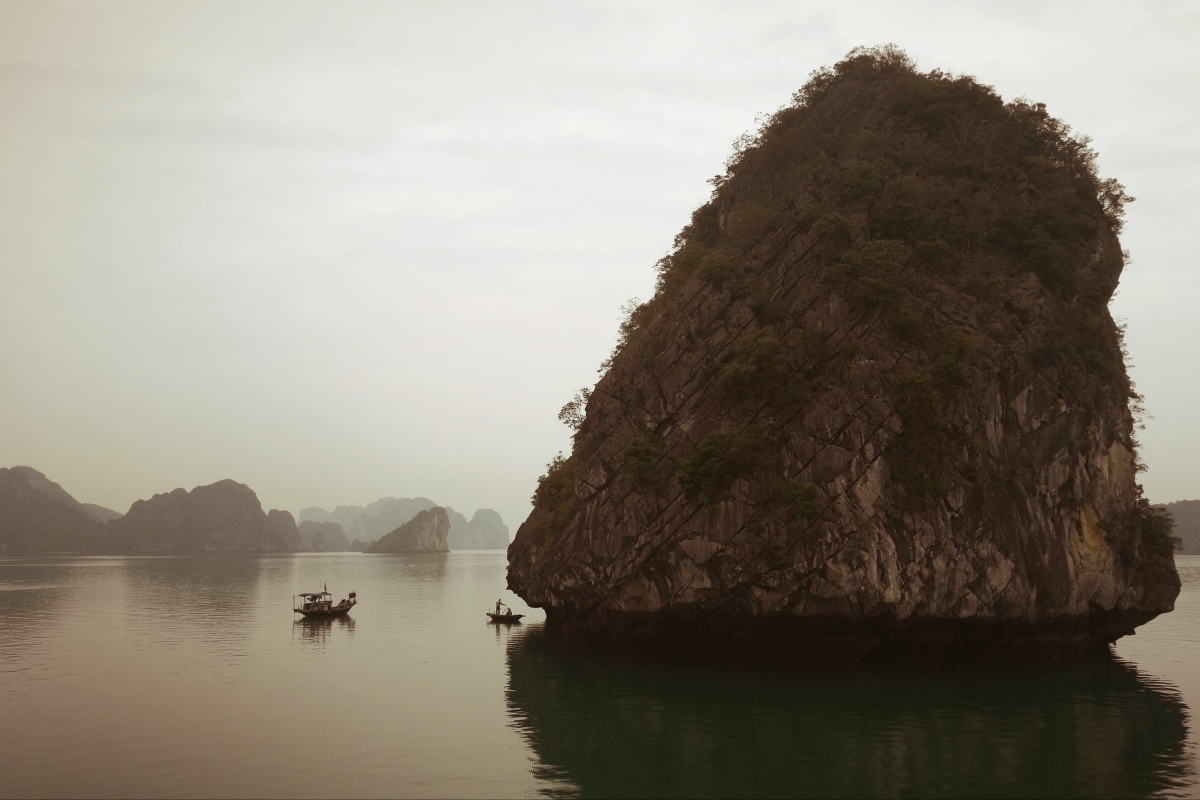 Whoever goes to Vietnam will not get around a visit to Halong Bay in the southeast of Hanoi. The island landscape is the country’s #1 tourist destination and basically a must on any traveller’s itinerary.

There are several ways to explore Halong Bay. The most common and convenient being a two or three-day cruise on a small to medium sized boat. We had enough time on our hands to go for the three-day option. Our transport from Hanoi picked us up at around 8AM and took about three and a half hours to get to the port. On the small tender which brought us to the cruise boat we met most of the passengers including George and Freya, our companions for the next three days.

Not knowing what to expect, we were happy with the boat and our cabin, in which we wouldn’t spend much time in due to the high number activities ahead of us.

We started with a cruise through the bay, the perfect time for a first beer, and a stop at a small island with a 360° viewing platform over the bay area. The island was very busy and from the view it was clear that we were not alone; we could see dozens of other boats from up there. Later we could go kayaking in a calmer corner, an activity that not all the companies offer.

Dinner was served after a short cooking class during which we were taught how to prepare the Vietnamese spring rolls accompanied by cultural insights from our guide on arranged marriages and the ongoing lack of women’s rights in Vietnam.  He somehow managed to squeeze that delicate topic in between the cooking steps “…so the women still have little rights and are sometimes forced into marriages. Then dip the spring roll in the sauce, enjoy!”.
The dinner table was full, there was something for everybody. Fish, chicken, rice, vegetables, seafood, pasta and more.

Once it got dark, a crew member mounted a strong lamp on the outside of the tender that was with us again and illuminated the water below. It was time for squid-fishing. The rods consisted of a thin bamboo stick, a cord and a relatively big trident hook. No bait was needed, as the squid got attracted by the light. The technique is similar to fishing Piranhas, you move the rod around constantly to get the squid interested, and once there is one close-by you whack the thing out of the water. It’s not an easy task and I’m not somebody that likes to show off, but I earned the nickname Squiddy-McGee as I was the only one catching any besides the crew member that must have slightly more experience.

We finished the night with some Karaoke which George clearly dominated, both with enthusiasm and talent. The songs available were pretty diverse, with loads of international hits to choose from. The background videos were a whole different story though. Locally filmed snippets of a man smoking, drinking coffee or walking around with a girl. It made for great entertainment in the moments nobody managed to keep up with the lyrics.

The second day started with some Tai Chi in the morning sun. After breakfast, we transferred to a smaller boat for the day and got a break from all the activities. We mostly just cruised around and stopped for swimming and to explore a cave. We spent the day on deck of the boat drinking beer and playing our new favourite dice game called Perudo that George and Freya introduced us to. 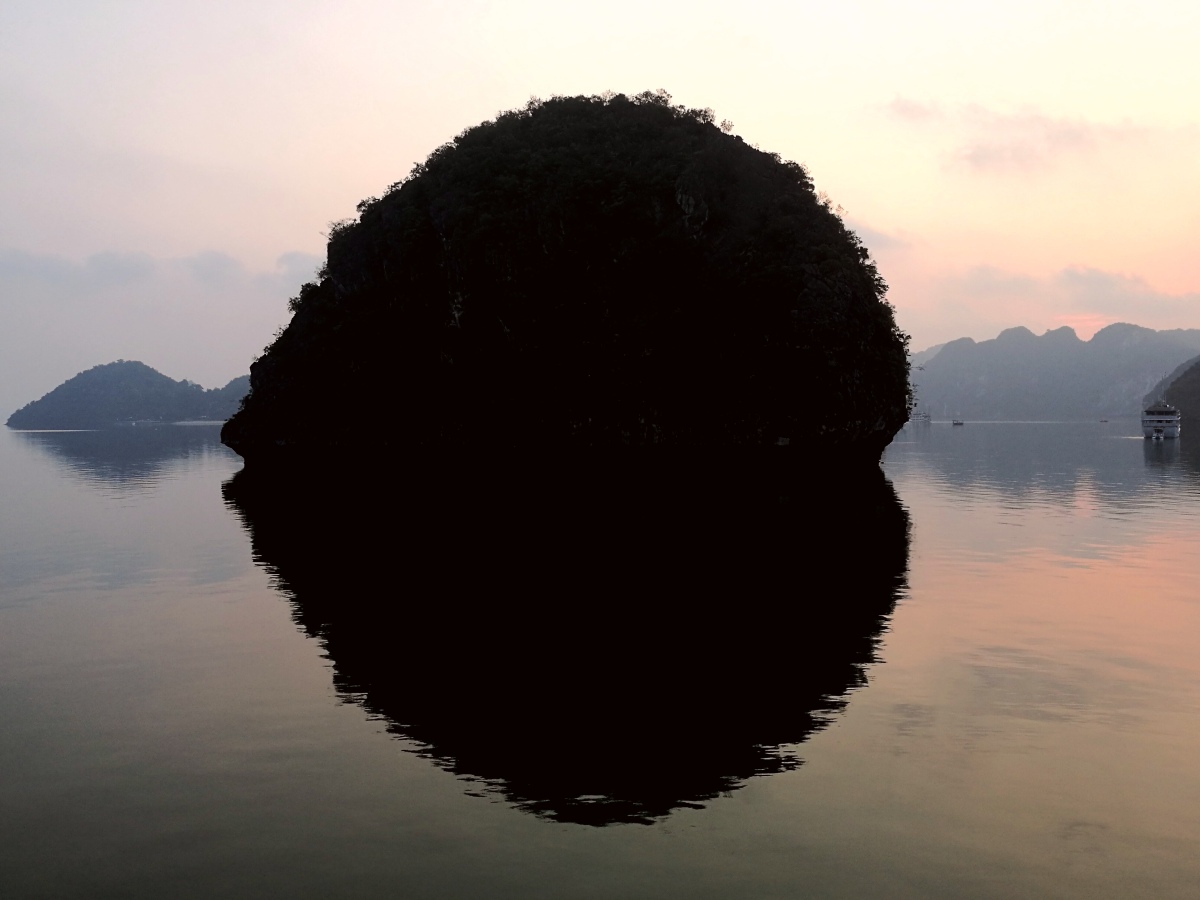 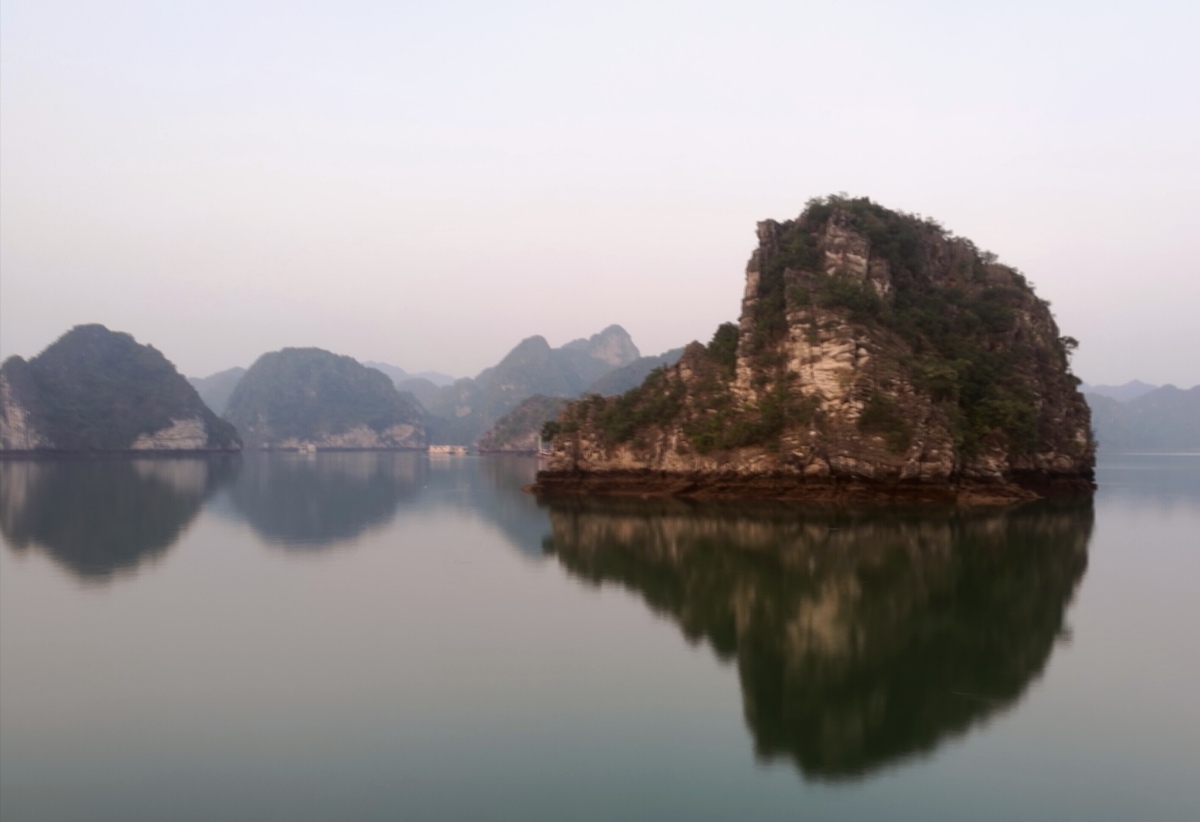 The last day felt a bit too touristic for our taste as we went on to explore the inside of the archipelago’s largest cave system, called Morning Glory (the second picture below gives a clue on where the name comes from). Undoubtfully, it was very impressive, but the sheer number of people herded through the cave’s gigantic halls was insane.

We were served a final lunch on the boat and then it was already time to leave. Overall, we were very happy with our experience and will keep very good memories of these few days.
Our van drove back to Hanoi and Barbara and I caught a Uber to the airport the same evening to catch a flight to Hoi An.